Kaitlyn’s dad, Mark, is originally from Youngstown, OH. He attended the Unites States Naval Academy prior to becoming a Navy pilot. He is currently a Captain in the Navy. Kaitlyn’s, mom, Jennifer, is originally from Pensacola, FL. She holds a BS degree in Health Education but became a full time mom after Kaitlyn’s diagnosis in 1996. Her educational background has assisted in understanding Kaitlyn’s complex medical issues. 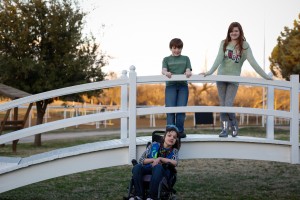 Kaitlyn has a sister, Danielle, and a brother, Jake. The family also includes a black Labrador Retriever named Cody, and two rescue cats, Max and Katniss. Due to dad’s military career the family has lived in many places such as Washington, DC, New Orleans and Maine. This is their third time living in Texas.